What is a Shaman: Your Guide to Understanding the Mysteries of Shamanism 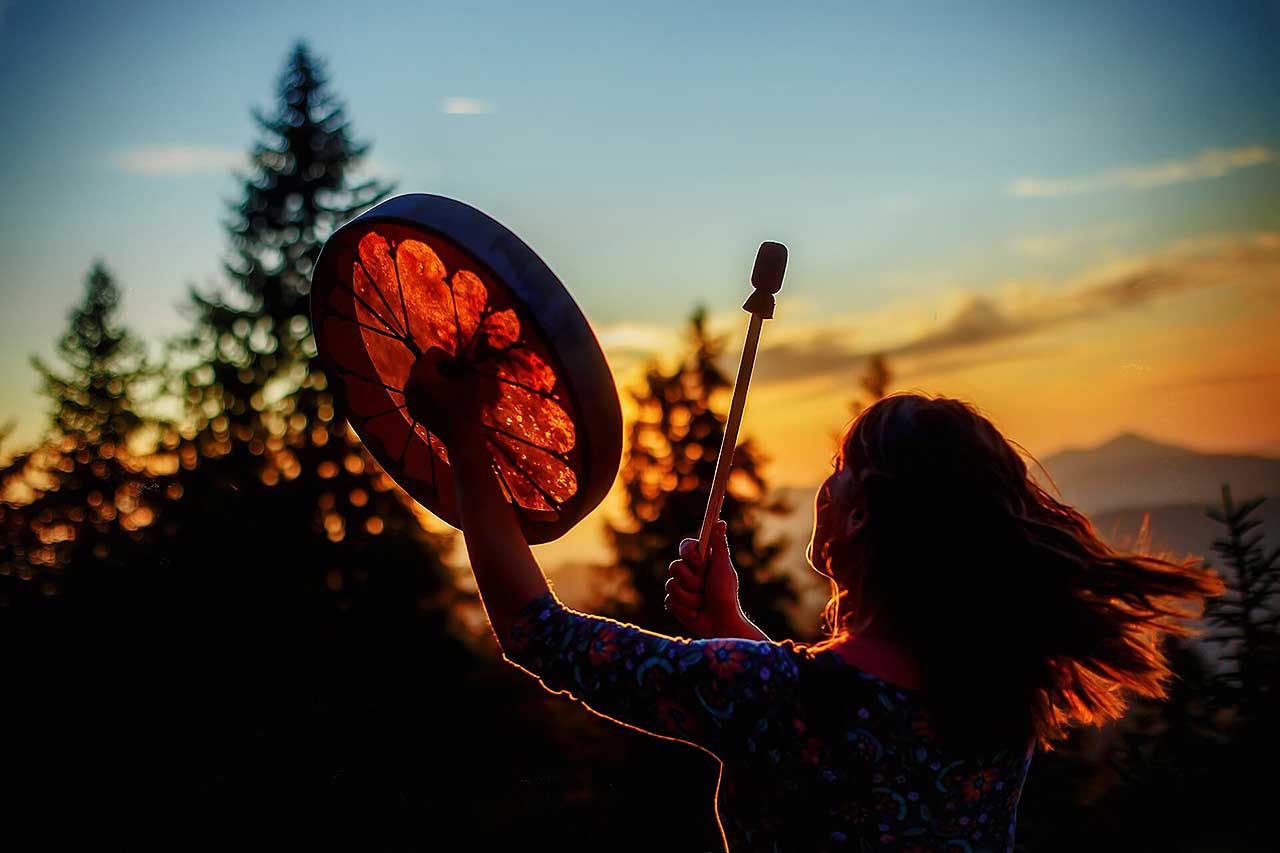 What is a shaman? If you are asking this question, you must be curious about the practice of shamanism that originated thousands of years ago in indigenous tribes all over the world. Perhaps you have read legends about wise and powerful shamans or have seen characters in movies.

Regardless of where you got the initial information about shamans, it is clear that you are intrigued by them. It is not surprising though, because shamanism is a spiritual practice that carries many mysteries and secrets. Allow us to let you in on some of those.

Shamanism is a spiritual practice linking the earthly world with other realms of existence.

There are many thoughts about where the word “shaman” came from. Some think it was from the language of Siberian tribes and means “one who knows” or “one who is moved or excited.” Others believe that the word came from the Hindus and described the practice of healing. Both of these can be possible origins of the word shaman.

This is because practices of shamanism involve a great deal of wisdom and healing, but they also include achieving a trance-like state to perform shamanic rituals. Shamans can transcend the earthly world and communicate with spirits.

Characteristics of a shaman

So, what is a shaman?

Shamanism is one of the oldest practices built upon the teachings of the Mother Earth. It is also one of the oldest healing practices that originated from and is deeply connected to the natural world. There is no way to tell exactly when shamanism first appeared, but archeologists have found cave drawings of shamanist practices going as far as 30,000 years back. Aside from paintings, many objects related to shamans were found dating back to the Iron Age.

Shamanism might just well be the oldest spiritual practice based on animism, which is the belief that everything in nature is a living being that has a spirit. First shamans are thought to come from ancient indigenous traditions like the Native American, South American, Indian, and Siberian cultures. Shamans from the Peruvian Andes believe that their traditions go more than 50,000 years back, so it is hard to say exactly when the shamanist culture started.

Ancient shamans experienced nature energies and perceived the physical world as an expression of many energies surrounding them. These days, there are not many shamans left, because the modern world has become very disconnected from nature. However, there are still mysterious influences in place which can help shamans discover their true selves. Taking care of nature and the environment is also a step toward respecting and uniting with nature.

Even though shamanism in different parts of the planet still share the same roots and ideals, its practices differ depending on location. To learn more about the ancient practice of shamanism, let’s take a closer look.

Shamanic traditions from around the world

To become a shaman in ancient Native American tribes, one needed to be born into a family of shamans or complete a difficult personal quest. People turned to these shamans for

If you asked, “What is a shaman?” in ancient times of North America, you would get the answer: a healer. Healing was the main focus of Native American shamans to maintain the well-being of their tribes. Shamans were mostly men, but there are legends about female shamans as well.

In South America, shamans were thought to be rulers of their tribes because of their authority and wisdom. They gathered in areas surrounding the Amazon and were thought to be connected to jaguars. People believed that shamans could transform into jaguars and whenever they saw this animal, they thought it was actually a shaman or a soul of a shaman who had passed away.

South American shamans often used hallucinogens like Ayahuasca to achieve the state of trance. Up until now, this plant is known to induce intense psychedelic experiences. Shamans were experts in mixing various plants from the rainforest and mixing teas for their ceremonies. They also played instruments like drums or rattles that helped them enter trance. Rattles, in particular, were a symbol of the connection between the physical and spiritual realms.

Siberian and Mongolian tribes speaking a language known as Tungus were one of the first shamans. They were highly respected and valued in their tribes. To become a shaman, one needed to go through an initiation process or complete a personal spiritual quest to connect with nature and learn its ways. In Siberia, shamans lived in yurts, which were said to connect the physical world with the spiritual realms.

Siberian shamans are believed to have used hallucinogenic mushrooms to enter the state of trance, plants which were poisonous in large amounts. In the modern world, it is thought that some indigenous populations in Siberia still practice shamanism. Contemporary shamans practice environmentalism and being in co-existence with other religious practices.

Signs you may be a shaman

Many people think that shamanism is a practice of indigenous cultures, so if you do not belong to one, you probably do not know what role you could play as a shaman in the modern world. Now that you understand what is a shaman, learn to recognize the signs you might be one.

1. You enjoy being in nature

There are a lot of people who love nature, but not all of them are shamans. Shamans traditionally serve as a bridge between the human and nature worlds, so they are very connected to plants, animals, mountains, and water sources. When you are out in nature, listen closely, and if you feel like nature is speaking to you or you can tune in to its energies, this can be a sign of you being a shaman.

Most shamans are introverts who enjoy their own company. In history, shamans were always considered “different,” so it was hard for them to fit into society, and most of them had to live as outcasts in some way. They were wise and respected for their wisdom, so it is not like they were rejected, but others could not always understand them. As they connected the earthly and the spiritual worlds, it was hard for them to integrate into society.

3. You feel the energies of spirits

Shamans always knew when spirits were present in their surroundings. If you ever felt like there were spirits around in your home, at work, or even outside, then you might be a shaman without realizing it. As you already know what is a shaman, you know that such people can feel an intuitive connection to the spiritual world, so they can sense energies of spirits instinctively.

4. You have psychic dreams or can astral travel

Shamans can travel between dimensions using astral projection, but they also can get glimpses into the past, present, and future of themselves and others. So, if you have a gift of shamanism, then you might experience psychic dreams or astral travel during sleep.

5. You have overcome a hardship

From indigenous legends, it seems that a shaman is a person who was able to survive after being struck by lightning. Modern shamans do not have to experience that, but they might have survived a life-threatening situation, or had an out-of-body experience, or overcome any other type of trauma. After going through such hardships, a shaman becomes a healer.

6. You feel the need to help others

Shamans desire to help others from an early age. They feel the need to give back to the planet and humanity. If you do a lot of volunteer work and support other humanitarian activities, and people often come to you seeking advice or help, then you might be a shaman without realizing it. Sometimes, your calling might make you lose yourself in this constant pursuit of doing something for others, so finding a balance is important.

7. You have psychic abilities

Many shamans also have psychic abilities. If you feel healing energies in your hands and can heal others with them, or if you can use telepathy to talk to others or nature beings, this might be a sign of you being a shaman. Receiving visions about other people and their past, present, and future can be another sign of having psychic abilities and being a shaman.

Why should you practice shamanism?

Now that you know the signs of being a shaman, you might be wondering, why should you practice shamanism? How can your shamanic abilities help you and others around you in the modern world? Well, as you have seen, ‘what is a shaman; is largely defined by connection and closeness to nature as well as using shamanic powers for the benefit of others. By exploring your abilities, you can elevate your spirit and reach a higher understanding of healing yourself and others using only spiritual powers.

Although shamans derive their powers from nature, healers and channelers can also manipulate energies to treat physical or spiritual ailments. Ancient shamans believed that anyone could elevate their spirits to some extent, so if you are a healer or channeler, you can also benefit from shamanic wisdom. However, if you want to become a true shaman, make sure that this is your conscious decision because the path of a shaman is not at all easy.

How to become a shaman?

Many difficulties await you on the path to becoming a shaman. These people typically have their abilities from birth, but they must undergo initiation before being able to use their powers.

On the journey to becoming a shaman, physical, emotional, and spiritual hardships are waiting, so it is very difficult to reach that final goal. It all depends on you and what you wish. If you feel that shamanism is your calling, then your painful journey will be all worth it in the end. Being a shaman because you are meant to be one is different from becoming one unwillingly, so if this is something you really want to do, then your life will be filled with a sense of purpose and achievement at the end of the journey.

Now that you know more about shamanism, have you found the answer to your question “What is a shaman?” Being a shaman means devoting your abilities to the good of others and the community at large. Being a shaman also means communicating with spirits and the natural world to obtain great wisdom. But more than that, being a shaman means obtaining a sense of purpose and elevating your spirit, so if you feel shamanic powers in you, do not be afraid to explore them.

Page load link
We use cookies to ensure that we give you the best experience on our website. If you continue to use this site we will assume that you are happy with it. Find out more.
Go to Top